For the first few months of setting up Plymouth Software, I kept a weekly log of how things were going. The speed and excitement with which things got off the ground was great, but in later weeks I found myself writing similar content across posts. I decided to stop the weekly reports, and try out monthly updates, so here goes… 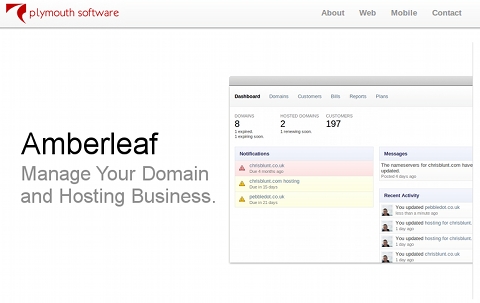 October has certainly been busy. Continuing my efforts to promote Amberleaf, I submitted it to a couple of Web 2.0 directories. The first, feedmyapp.com, resulted in a large influx of traffic into the app, and consequently Amberleaf was picked up by several app review sites.

Over the next few days, Amberleaf appeared on other directory sites, and is now receiving a steady stream of signups. Whilst I’m remaining realistic about conversion rates (every account has a 30 day free trial, so figures won’t be in for a month), I can’t deny this has been a great motivator.

Something I’ve noticed with the influx of new users is just off-putting entering a lot of domain data is in Amberleaf! Along with some design tweaks, additional currencies, and improvements to the UI for adding multiple domains, I’m considering how to set up a more robust feedback system for Amberleaf so people can easily submit their ideas and thoughts.

On October 25, my first article, Getting Started with Android and Eclipse, was published on Smashing Magazine. The comments and feedback I’ve received from the post have been great, and any initial anxieties I had about writing for such a large number of readers well and truly quashed. I’m now planning more articles and a follow-up with Smashing Magazine.

Smashing Magazine deserve a big thank you; they were fantastic in guiding me through the writing process. Apart from my studies - which seem all but a distant memory - my writing experience has generally been limited to posts on this blog. Having a real editing process was great not only for producing the article, but I hope has also helped to improve my writing.

As well as the products, I am working with some existing clients on their websites. Photographer Mark Stocks’ website, which launched at the end of last month, is proving successful in promoting his photography services and sales of his spectacular calendar, Vistas de Murcia. Mark has since commissioned the next phase of his website which brings in a gallery of work with the capability to purchase licensed photos for web and print media.

Although the current site runs on my lightweight Sinatra engine, the additional functionality introduced by the gallery has meant me migrating it to Rails 3. The transition was fairly simple, and has allowed me to quickly incorporate a working administration interface for the site, and front-end gallery for Mark’s photos.

This month also saw me working alongside Stasis Media to design and build a website for Melissa’s Kitchen, a catering company located in South East England. Requiring little complex functionality tied in with the company’s existing brand, I again used my Sinatra engine to develop the site. This allowed me to concentrate on the site’s design and worry less about implementation details.

October has been a great month with Amberleaf receiving an increasingly steady stream of sign ups. Outlime continues to sell in the background, although I hope to spend some time on the next release which will add some mockup functionality over the next month.

Rails 3: How to Simulate Paperclip Attachments With FactoryGirl In developing the next phase of markstocks.com, I needed to simulate a file upload attribute in my FactoryGirl factories. A quick Google revealed